Psychiatrist Simon Wessely, speaking of "CFS" researchers, was recently quoted: “People will rather go over Niagara in a barrel than ever getting involved in CFS again”. -Science, 23 September 2011

Why this psychiatrist is being quoted in Science is a mystery, especially since he claims to have left the field.

He admits to having no knowledge of virology, nor any interest in it. “We’re not going to go doing more and more tests to find out what the virus was because, frankly, even if we found it there’s nothing we’re going to do about it.  We’re in the business of rehabilitation.” (http://podcasts.bmj/2010/03/05.chronic-fatigue-syndrome).  In the face of all the evidence that a virus is associated with the disease, he now says, well there may have been a virus involved in the past but it's gone and now patients "erroneous illness beliefs" are keeping them thinking they are still sick. And his policy in UK is not to allow testing for biomedical abnormalities because it "only encourages them to think they're really sick."

Why, then, is Science quoting him in an article on recent viral and retroviral discoveries in this disease?

It's too bad Science didn't ask those 26 scientists and physicians, from 13 countries, who recently formulated the International Consensus Criteria for ME (the World Health Organization name for "CFS") whether they and their colleagues “will rather go over Niagara in a barrel” than continue the biomedical research they have engaged in for decades. The new ICC list over 100 scientific papers and other resources demonstrating the various biomedical abnormalities in "cfs", with dates ranging from as long ago as the 1990s.

Dr. Wessely has dedicated his whole career to nullifying the research of those who would find the cause and treatment of this extremely debilitating illness. That he can, with a straight face, declare "they will rather go over Niagara in a barrel than ever getting involved in CFS again" is a baldfaced misrepresentation of the facts. Why does Science magazine quote an anti-science psychiatrist, supermarket tabloid style, when there are so many better options?

A close examination of his research would indicate he never entered the field in the first place. He started with the disability insurance company position that ME (myalgic encephalomyelitis), later morphed into the derisive and inaccurate term chronic fatigue syndrome, is and always has been a mental illness.

Three decades of biomedical research showing everything from punctate lesions in patients' brains to distinctive immune system abnormalities, mitochondrial damage at the molecular level and neurological damage have not swayed him from his mission.

Getting paid well to deny the facts can do that. The tobacco companies did it for decades, guided by their advertising agency's advice to sow doubt, sow doubt, sow doubt and never stop repeating it. Sowing doubt is what Dr. Wessely is good at, but biomedical research is getting the best of him lately.

So he has resorted to smearing the patients he claims he can “rehabilitate” with talk therapy, exercise “therapy” and psychotropic drugs. Those patients who don't go along with the program in the UK can be forcibly incarcerated in a mental hospital and have psychotropic drugs forced upon them for having the “delusion” that their illness is biomedical.

In fact, one such patient is, at this moment, being held against his will, having forced psychotropic drug “treatment” that is contraindicated in orthostatic intolerance. His “crime”? Treating himself (by drinking more water) for orthostatic intolerance, a commonly recognized symptom of ME/CFS and not backing down when told he was delusional about the existence of the symptom and the illness itself. This patient has a “cfs” diagnosis, including orthostatic intolerance, from both a UK private doctor and one in the US. http://www.mecfsforums.com/index.php/topic,9297.0.html

But UK government doctors don't have to recognize any authority other than their own and Dr. Wessely himself has formulated their policy and signed off on having uncooperative patients forcibly removed from their homes and their caregivers (some of whom have also been threatened with forced hospitalization in a locked mental ward). It is claimed they are "a danger to themselves" for refusing the exercise "therapy", talk "therapy" and psychotropic drugs offered in the only "cfs" treatment centers offered in UK.

Dr. Wessely's smear tactics reached a new low this year when he claimed unsubstantiated death threats from ME patients and what he calls harassment but others would call freedom of speech, freedom of information and access to public records. To challenge his misuse of millions of dollars in research funding is evidence, to Dr. Wessely, that patients are “threatening.” Patients who have systematically had their reality dismissed by Dr. Wessely write him angry, hateful emails. As a psychiatrist, wouldn't his denying the reality of millions of patients with this illness be expected to elicit some hostility? One cannot incarcerate and drug them all so the next move is to convict patients in the court of public opinion.

In the past he and his backers have been satisfied with calling ME patients hypochondriacs, the medically undeserving, disgusting and so delusional as to have nothing but “illness beliefs”. His mind-over-body theory apparently embraces the non-scientific myth that the mind can produce physical evidence of brain damage, immune cell damage and all sorts of measurable physical evidence that is accepted as evidence of disease in most if not all other biomedical illnesses, but not in this one.

Hospital personnel have been forced to allow children and adults with this illness to lie in their own excrement and urine to “prove” they are faking their weakness. Patients have been nearly starved and severely dehydrated in hospitals to “prove” they are faking their inability to feed themselves, to swallow normally and take in enough water. In fact, a previous incarceration by force under Dr. Wessely's policies resulted in the patient's deterioration while in the mental hospital; death a few months after she (Sophia Mizra http://www.sophiaandme.org.uk/ ) was released; an autopsy that showed severe renal dehydration and ganglionitis of the spinal nerves. The coroner judged her death as due to ME. She had been improving prior to having the police break in to her apartment and help having her taken her away.

Yet Dr. Wessely continues to chant the disability insurance company mantra that this illness is “somatisation par excellence” (J Psychosom Res 1994:38:2:89-98); the only two options are “rehabilitation” and return to work, or being abandoned by society as “fakers”? Is it any wonder that ME patients worldwide would like him to make good his threat to leave the field? Is it any wonder American patients would like him to stop influencing the government and the media in America?

I have found a 50-gallon barrel produced in Virginia that costs about $80, plus shipping, which would probably be another $80 or more, but I'll need to check into it. Two barrels can be had for $150, in case Dr. Wessely's wife, Professor of Psychosomatic Medicine, would like to accompany him over the Falls. Of course any broken bones or internal injuries could be rehabilitated with exercise therapy, talk therapy and psychotropic drugs since they would only be erroneous illness beliefs. It would be an opportunity to display the influence of mind over matter that Dr. Wessely espouses.

The water itself shouldn't be of any concern. Dr. Wessely's policy of throwing a teenage patient into a swimming pool to “prove” he was faking turned out OK when his mother jumped in, fully clothed, to bring him back to the surface and give him first aid. We could have Dr. Wessley's mother standing by in case he needed any help with the erroneous inhalation of water.

I also found some smaller barrels with the added feature of having a message printed on them. I was thinking “My mind will protect me from bodily harm” would be a good message for Dr. Wessely's barrel, but these barrels are probably too small to contain him and his ego, too.

What do you think, dear readers of Science and other gossipy magazines like it? Should we help Dr. Wessely avoid “getting involved in 'CFS' ever again”?

Plastic, steel or wood? Fifty gallon or the smaller one with the added message? One barrel or two?

As an aside, while searching for the appropriate barrel(s) I came across a site that recommends which beer is the appropriate accompaniment for which type of over-the-Falls-barreler and lists some of the more famous trips over Niagara Falls.

For futher amusement, I include two of them.

The one I thought most resembled the age in which Dr.Wessely is stuck:

Englishman Charles G. Stephens equipped his wooden barrel with an anvil for added balance and stabilization.  Charles tied himself to the anvil for security and after the plunge when Chuck's entourage went to open the barrel and celebrate the feat, they found  that Chuck's right arm was the only item left inside.... we wonder what happened to that glorious 'stache... TWB recommends Rogue's Shakespeare Stout... it clings to mustaches like Chuck's right arm clings to the inside of a barrel.

Interestingly enough, the first person to successfully go over the Falls in a wooden barrel was a woman. (Myra McClure, are you paying attention? Of course, you'd need to let Dr. Wessely go first: Age before beauty...): 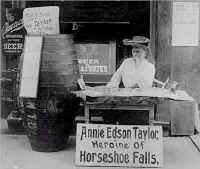 Annie Taylor was the first person to conquer the falls in a wooden barrel.  After climbing inside her airtight wooden barrel, a bicycle pump was used to compress the air to 30 p.s.i..  We don't know why that's relevant, but we note it anyway.

She survived the feat with mere bumps and bruises.  Most would think that she'd spend the rest of her life in fame and fortune since daredevils of the early 1900's are like today's reality stars.  However, sadly, Annie died broke and barreless.. much like today's reality stars.  TWB recommends that Annie enjoy any beer in a brown bag... no need for a craft brew... any beer will do.
Posted by oerganix at 1:34 PM